A downloadable roguelike for Windows, macOS, and Linux

In this game you are a witcher who has to work as much with alchemical instruments as with his sword.

Save your love from curse by preparing a legendary elixir called quinta essentia, the fifth essence. Ingredients can only be found at the magical island of Sulca, but it's full of monsters and you're not young anymore!

Not only the island is randomly generated, but also all the herbs with their looks and properties. Each time you have to look for different ways of creating powerful potions.

If you liked this game, you may want to follow me on Twitter and also enjoy my 7DRL 2018 attempt called Artifex Gladii — a fencing roguelike placed in a dark world inhabitated by ratfolk and humans.

I'm not sure how you end the game.  Once you get the Quinta Essentia (lift curse without any kill effects), and you get it back to the sorceress, what do you do?  dropping the item in her space does nothing, as far as I can tell-- the item merely shifts off into another square.  Splashing the item results in '(Azhmaya liver with Bictea) effects the dying sorceress!' (in this case the essentia was made via mixing with a fume, improve strength, persistence,  persistence herb) with no other effects.  The fumes effect you also, of course, which gives you a cautionary message that makes it sound like you weren't simultaneously affecting the sorceress, but there's no message when the sorceress is affected besides the aforementioned one and her timer keeps counting down.  I still have the potion even after splashing it, though (double persistance may be part of letting you do that, I thought, but it works even with Lift Curse instead so that's weird) so as long as I drop and pick up the item after each use I can keep filling the area with fumes.  Is there an amount of Lift Curse that's needed?  I only have it at 1 currently.

I tried getting rid of the Fume effect and it didn't work.  Probably should have tried boosting lift curse first because now the essentia is gone :/  'affects the Dying sorceress' just like always but no victory.

Sorry, but this sounds like a bug. If it was presented as quinta essentia in your inventory, she should be cured. Lift curse property with any strength and without kill effect should be enough. Moreover, it should disappear from your inventory after being used.

I hope you weren't disappointed very much. Congratulations for finishing the game anyway.

Replayed the game and got the ending.  It is neat :)  The game was very fun, though the bugs can be pretty frustrating but that's expected in a 7DRL.  The interaction of processes and ingredients is cool, particularly in that there's no limit to how processed you can make something except time.  A pretty good strategy seems to be to make an Improves Stat, Fumes, Adrenaline potion (it would be even better if you got it to improve both stats but I haven't done that yet because time is a pretty serious concern.  Either stat works but STR is easier) and then just age the heck out of it-- fumes gets better exponentially and even a single point of adrenaline means you can eat the whole cloud.  The increase in stat improvement likelihood is also nice if that's in the right slot.

It does seem, though, that if you muck with an ingredient too much it can cause problems-- the game starts outputting error messages occasionally at the very least.  The processes are cool in that they do a good job of being thematic given the limitations-- if you boil something long enough/enough times you usually end up with nothing, for example, and rotten food is usually bad.  It's a little weird that spoiling is sometimes really good and you can't do that without fermenting first.

Fumes is by far the most powerful ability-- it can multiply a potion's effect by 9 at the lowest levels-- but it doesn't help with offensive potions and it doesn't do anything on its own so that's kind of interesting.  Persists is sad-- it pretty much only matters with Fumes and only if your cloud doesn't have adrenaline.  For offensive potions it's not really needed because a good offensive potion should be useable in melee and Persists doesn't let clouds get used multiple times (which would be rediculous, admittedly).  Persist, however, seems to be pretty buggy-- persist items trigger the bug where splashed ingredients aren't consumed more often than other items.

The limited inventory space really makes Improves Stat items essential.  You can't carry very many Heal/Teleport/Paralyze/Adrenaline/Burn potions and each of those solves mostly just a single fight (Heal is better, but the issue there is you get nothing from fights and you will run out eventually) and limits what else you can pick up.  Improves Stat is permanent and, at high levels, makes you able to easily cruise through the whole game without taking very much damage even without potion use.

Thanks for the comments. Balancing the issues you mention would cost me very much time though (because of crazy technical debt caused by the challenge's pace), so I'm not planning to fix them.

Still, it's a good game-design exercise to try to think what could make the alchemical processes and effects better. I think that especially  improving the fumes' offensive potential would be fun.

I finally tried this and it's amazing!

Linux version does not work. I think "${projectname}_data" is not created, so it sort of does not know where to look for files (everything is at ".").

Ouch, thanks for reporting! I can see a non-empty Quinta essentia_data directory in the archive. Can you give me more details or suggestion for a fix?

Probably it was caused by the fact that I packed it to a RAR. I just uploaded a ZIP, could you please try again?

Should be working now. I think the RAR file was the only culprit. Also I changed the rendering engine in Linux to OpenGL Core, because some glitches were reported for Vulkan.

Cool. Thanks for checking!

After reviewing process, finally I have enough time to check some 7DRL entries at my own. I heard good things about Quinta Essentia, and I wasn't disappointed. The first thing I noticed is Unity, though - and I didn't play good unity 7drl... Well, until now. I could write long post about game mechanics, alchemy system, graphics (even if it's based on existing tilesets), etc. But as most impressive I found how you managed, in 7 days, to make that big *and* polished game.

Ah, but besides compliments, I have bug report for you. It was my first run - I checked "?" already, dragged map here and there as well. I wanted to move right, towards couldron (but I wasn't bumping it yet). Animation started to process, but then game froze - I had kill it manually. No error messages, no log file created. I was playing in 1366x768 window, on easy, using slavic herb names; world seed: seed872.

edit: It's a long shot, but... are you Deaven from ADOM forum?

I can reproduce it. All you need to do is run game under seed872, on easy, then move.

I tried to test it a bit, so - some 1. I can reproduce bug only under this specific seed. 2. Resolution and fullscreen status are irrelevant. 3. It doesn't trigger on medium nor on hard. 4. Herb naming style doesn't matter.

Thanks for warm words. As for the scope of the game, it was doable because I based it on my own engine which I've been working on for over a year. I heard many things recently about difficulties in creating roguelikes in Unity and it encourages me to reveal my engine and make it open-source.

Thank you for precise bug report, I'll look into it.

A ja Elv :) Nice to see you - sticking with roguelikes after all these years :). Strange that I didn't notice it during playing Artifex Gladii, though.

Great to see a fellow! 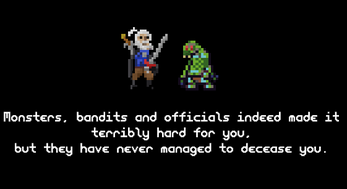 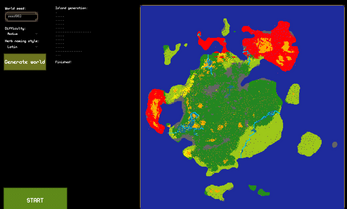 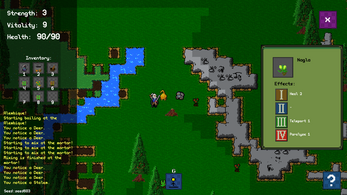